We are here. Enter 2 Aussies into New Orleans, Louisiana. Now before I go any further, we must do the pronounciation test, please say it correctly.

The city where you feed your belly and feed your  soul

The hotel to Bourbon Street transition was fast. Hotel pit stop, literally to throw our belongings in the room and whoosh we are out.

Step outside and the party has started. Festivals everywhere have taken place over the past week. New Orleans don’t you try to kid me, this city is one long festival, all day every day. Julia street festival first, walk out hotel and look left to an overdramatised mock wrestling match  in the street. Backflips, throat holds, people yelling and cheering, yes & drinking. Let’s keep going. Next! Bourbon Street here we come.

Okay hang on, I have another box to tick. As we headed to Bourbon Street, we went via the Mississippi River. Yes sir I’m on the banks of the Mississippi River. A paddle steamer is pulling out from the banks. Thoughts of showboat come into my mind. It’s all a bit surreal right now. We stood, we watched.  Walking on, walking through Jackson Square. I will revisit Jackson Square again, more than once.

So the infamous Bourbon Street, im here, I’m going to call it, everyone is smiling street, oh yes there are many other names we could call it but let’s leave it there.

Exciting as a word to describe New Orleans, is an understatement, maybe electric, wild, yes definitely wild, vibrant, intoxicating and intoxicated, as it appears everyone is. One big crazy party. A Mardi Gras every day. Bands are playing, people are walking with a skip in their step and dancing, a lot of dancing.

Take away food shops are selling cocktails the size of fish bowls. People are dressed up, people are dressed down. Girls in bras, yes, I know, really? Am I getting old, is this the latest trend? Shops selling cigarettes, cigars and hookahs. The smell of cigars and marijuana permeates through the air. No one bats an eye lid.

Vooodoo shops selling skulls, masks and paraphernalia to curse, stick a pin in you or make a dream come true, are common and everywhere.

Advertising for haunted tours, swamp tours, cemetery tours and vampire tours on every block. Tarot card readers, palm readers and physics tell of good fortunes on every corner. Street artists and performers are in wonderful abundance.

On the adjacent streets buskers are performing, their performances rival “the voice” contestants or established singers and even superstars . Music, magical music is at the heart of this upbeat city.  We watch marching bands parading up Bourbon Street. Everyone on the street joins the moment. That one moment where everyone around, is part of it. People everywhere, are drunk, happy or both.

Big bottomed girls shake there booty like they are the sexiest women alive. You know what? They are god damn sexy. Dress ups is big on the agenda. Marie Antionette was visiting from a time gone by, a pirate, pussy cats, girls wearing fabulous fascinators, people posing as gold statues giving attitude, costumes I just don’t know how to describe except colourful.

Tap dancers, kids playing ice cream containers as drums, one man just lay on the ground with his finger up and his collection tin in front of him.

Everyone trying to make a buck anyway they can.

Games of chess between old and young, mostly men, was a vision already in my head, put into reality.

Jacksons square again today, we watched a band. A group of boys and young men each toting a brass instrument. The home of Jazz gets them young and they seem to have an inbuilt talent.

The crowd mesmerized, fixated. We watched, we took photos, everyone danced. The young, the old, the workers, the tourists. A young mother with her two small children shimmied her way up to the band and danced like no one was watching. No one is unaffected. A chef from a nearby restaurant struts his stuff into the dance space. A homeless man has the crowd in the palm of his hand with his moves, flirty eyes, winking and giving that come hither look, crazy antics, what antics? Um only putting his cigarette into his mouth the wrong way. He had me laughing. He earned himself a few dollars on the side. Why not.

Kids, the shoe shine man, we were all part of this magic moment in time. The music, the atmosphere, it grabs you, it pulls you in and fills you with, I’m going to say good vibes. This is an infectious place. It’s makes you happy.  I have had a permanent ear to ear smile since I arrived.

Terraced houses with a French influence line the streets, literally. No front yards. Just a step or two and you are at their front door. Balconies, potentially flimsy balconies, where you climb out of a window to sit and watch the wonderful world go by. However, inspecting a little closer,  the structural component may appear inadequate, you have to wonder what holds them in place. But, they look absolutely fabulous darlings,  with flags adorning each balcony. Always the American flag, but you may also see a Mardi gras flag, the state flag of Louisiana or a French flag. Pot plants, mannequins and strings of beads also decorating these quaint little balconettes.

Next stop, poles apart, running adjacent to Bourbon Street is Royal street. Arty and chic with top class restaurants, designer shops and small markets filled with local artists works. If only I had a bigger suitcase.

Back to crazy, we hit Frenchman street, hmmm, think bourbon street with an added dash of debauchery.  We entered a bar called the spotted cat. Once in, I’m surprised we survived and found our way out. A jazz band played in one small corner whilst the man on the door oblivious to a head count continued his spiel as if automated $5 please,  $5, as everyone was pushed through the small door of the very small bar. My visual here was boobs and shoulder blades. Being on the smaller side does come at a disadvantage sometimes, like right now,  at this crowded moment in this very crowded hour. We did escape, how? I’m still asking myself.

So breakfast here runs from 3am to 11am.  Enter a new dawn and people are drinking. Are they still going or restarting? The party streets are now putrid. Now the smell of urine permeates through the air in place of marijuana.

By midday the city is clean and alive again. Colourful personalities, politeness which is unsurpassed. Pardon me ma’am, a young man says when I accidently bump him. I mean I bumped him and he apologizes. Ma’am when did I become a ma’am.

The homeless and there are many, congregate on park benches as a new day begins. They are polite, kind and friendly as everyone is in Nu-Or-Lins. A country of contrast, sadly, which we tried to capture on camera, and missed.  Picture this, a neon billboard advertising a lottery win of $233 million dollars where just below, 3 men are scavenging the remnants of last nights half empty bottles on the ground.

Dinner on our last night was in a place called Tommy’s. It reminded me of the prohibition. A huge elaborate hall. Many tables and many patrons. Low hanging lights and fans and an Italian owner who makes his way to chat to every table. An eggplant mouse was served and it was an amazing last meal is amazing New Orleans

I do love this place.

This ma’am will be back 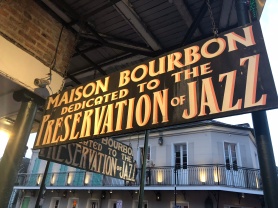 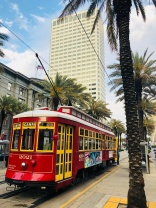 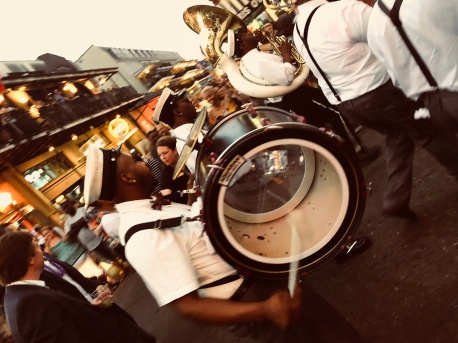 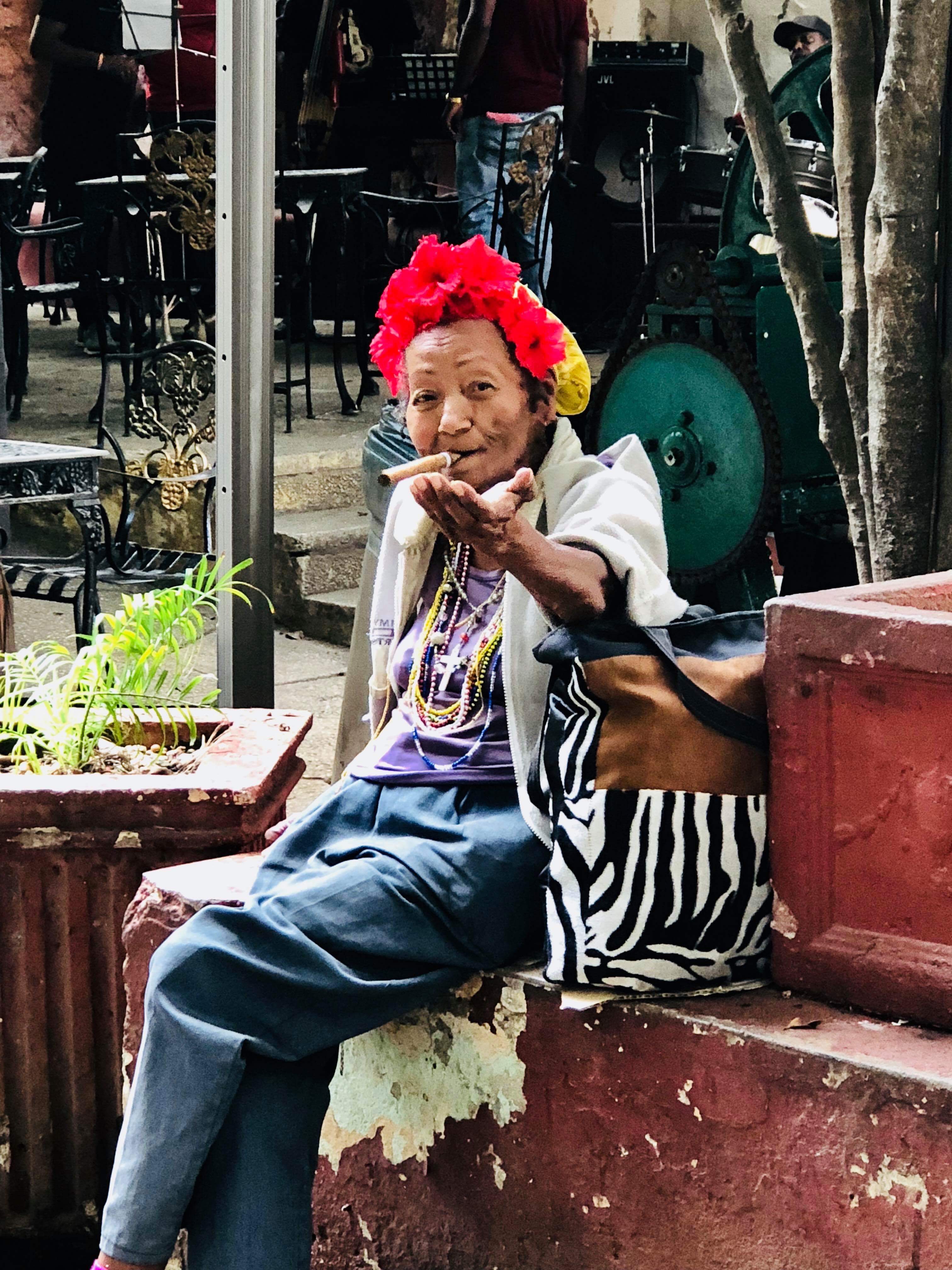